Thank you Toronto, you are amazing. 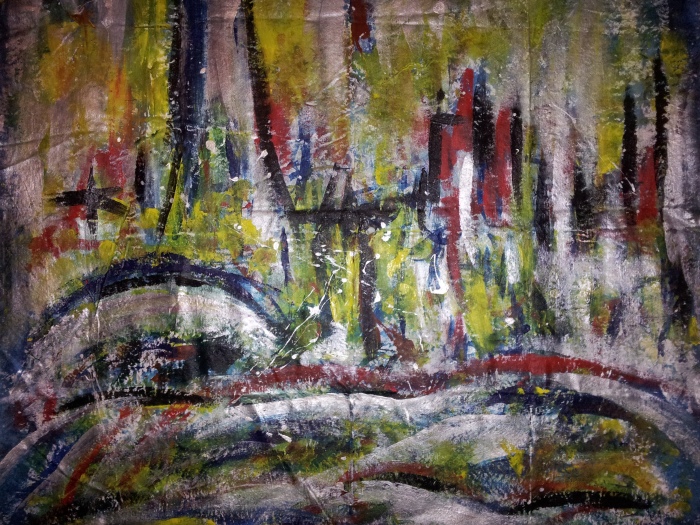 I did my best to come to Toronto with no expectation. I knew I had to come here; really the fish sent me. About 6 weeks ago I left Vancouver with only my Dog, some art supplies and my creativity. The rest I left back home with friends and family in various caches, rooms and basements. I knew the path I was on in Vancouver wasn’t sustainable and that the only way to change it was to have a physical transition.

Taking the train from Vancouver to Toronto was symbolic of transformation. The click clack of the railway and the passing landscape in its large windows, is ‘railway therapy’. I see why people fall in love with the train and particularly why retired grown men have train sets in their basement. We are pre-dating Bob the Builder now.

I arrived in Toronto without a set place to stay; it was a creative challenge. For those who lived in Vancouver for awhile, there is this undercurrent of jealousy about Toronto. Having grown-up and lived in Vancouver for the majority of my natural life, the “I Hate Toronto” mantra is analogous to rain.  At any point in conversation in Vancouver someone could dump a rainfall of hate on Toronto.  Those opportunities typically arise in winter when the intersection of a sunny winter/spring day in Vancouver matches with a Toronto blizzard.  Even if it snows, some go to a local ski to take a photo with a caption “I got here by transit, going kayaking later” The hate is probably fueled by some Stanley Cup insecurity; I mean we’ve had two riots caused by hockey, its now multi-generational.

From an environmentalist perspective there are lots of reasons to want to dislike Toronto, its a concrete highway jungle, its the center of finance and capitalism for the country.  However, I wanted to go in with an open canvas, what I discovered in Toronto was a unique collection of neighborhoods. The city was chalk a block full of people willing to have conversation, give free love to my Dog Star, house me, feed me, camp on their internet and introduce me to others.

I provoked the city for its farmed salmon eating habits. Toronto responded like a mature adult and said, educate me and show me the way.  Its like she was mildly entertained by my childish creative antics, almost too busy for anger. Toronto smiled and said she would make time to listen to me. It’s now my turn to make that time worth it for all of us.

At this point all I can say is Thank you Toronto, you are amazing. I’ll check my schedule and get back to you.