The ‘Art in Government’ 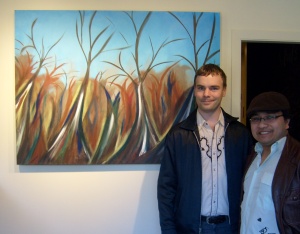 So I recently met Vancouver-West End MLA Spencer Chandra Herbert.  Spencer is the Tourism Arts and Culture Critic for the official opposition in BC’s Provincial Government.  He has this cool chalkboard in his office. While waiting I couldn’t help but to leave a little something.  After my meeting with him CJ noticed that the walls in his office were quite bare and suggested that I ask him if he would like some of my art on his walls.   It would also be a good opportunity for outsider and marginalized artists to get their works out in the community.  So I offered to lend one of my pieces on his wall for a few months, if it happens to sell, 50% of the sale would go to his favourite charity.  He selected Gallery Gachet as the benefactor.

So my piece ‘Browns’ is now at Spencer’s constituency office in Vancouver’s West End, 923 Denman Street.  Pop by, you can see it through the front window.

So the following week I had the opportunity to speak with BC’s Minister of Tourism, Arts and Culture, Kevin Krueger. After our conversation; I also asked if he had empty wall space in his constituency office and if I could offer the same program as I did to Mr. Herbert.  Kevin’s office agreed, so I am selecting a piece to submit to his office in Kamloops.  I will also be approaching other MLA’s and elected officials in this program.

I’ll be coordinating this program which I call ‘The Art in Government’ through Gallery Gachet and will be open to any collective member or active volunteer.  I will be rolling out this program in the next few months, stay tuned for updates.