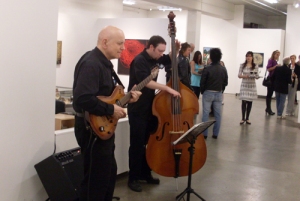 So I have been invited to participate in the Golden Brush art event put together by Monika Blichar and Kevan Seng.  When someone takes a leap in promoting the diversity of the arts in this city I usually pay attention.  I hesistated at first as I really didn’t want to associate competition with Art.  I’m not really a fan of art as a means of conflict and creative domination, but even in sport there are facets of the social dynamic that can be a benefit.  My participation is rooted in people who I believe in and as well as supporting those who take the risk to bring the arts to those that normally wouldn’t likely want to appreciate it.  There obviously is a halo affect with the Olympics and the thrill of competition that is being captured.

So even in the realm of this event there is the opportunity for people to see what my art is about and where it comes from.  Both Monika and Kevan know where that comes from and they have the belief in me to invite and accept me.  I would suppose that there is hesitation on my part to participate, cloaked by my pre-judgements about competition, but also likely of other personal reasons. Wearing the mental health badge comes bundled with paranoia and judgement not only about my creative abilities but the stigma that is carried with it.

So here is to the risk; as an artist, facing the demons are what fuels the inspiration for great art in the first place. So why would I not want to be a part of that. I hope you can check it out, the deets are below.

WITH ‘GOLDEN BRUSH’ STROKE OF GENIUS

Art will ‘come alive’ in the Vancouver community with the first annual ‘Golden Brush’ Art Competition Fundraiser. Fifteen local artists will compete in teams of three to benefit the Make and Break Arts Foundation, a non-profit organization to offer artists and the public opportunities to participate and create various forms of artistic expressions including visual and literary arts.

Vancouver, BC: June 22, 2010 – Easels and inspired canvases will display the spontaneous work of 15 local artists who will paint in the first annual ‘Golden Brush’ Competition and Art Auction July 3, 6:30 pm to 10:30pm, 258 East 1st Avenue (Main & 1st), Vancouver. The artists will paint ‘with passion for the cause’ in five teams of three, blending different genres of art into one collaborative creation per team canvas.

Sponsored by CapuletArt.com and MAB Ventures Incorporated, the “Golden Brush” will benefit artists through Make and Break Foundation, a non-profit organization which provides artistic opportunities for Vancouver artists who face economic barriers to participating in the arts.

After the impulsive painting ends, the charity art auction will take place, where attendees can vote on the winning canvas prior to the bidding. Other auction items include artist paint brushes, art lessons, and studio tours. Door prizes will be drawn, and a special freshly-created limited edition painting will be awarded at 10pm.  Live music and alcoholic and non-alcoholic refreshments will be provided.

“Vancouver has a deeply rooted and highly talented arts community which is embedded in our culture and pulsates in our vibrant lifestyle,” Seng says.

He adds a caveat that whereas cities such as Montreal ooze artistic culture from its artwork-branded buildings and streetscapes, to its barrage of street performers and festivals on a bi-weekly basis, we are a bit more demure on the West Coast.

“Winnipeg also has its own unique art scene which includes everything from the ballet to fringe art. Once art reaches the west coast, it’s a different vibe. I want to re-energize appreciation for our local arts culture and encourage emerging artists by bringing art to the street, live, in public view,” he says.

“The best way to draw people out is through parties, so naturally, I gathered up some artists to bring art to life through fun events such as the ‘Golden Brush’ Competition and by hosting my own art parties,” he says.

For co-sponsor, 27-year old Monika Blichar, owner of MAB Ventures Incorporated, an arts and entertainment organization in Vancouver, BC, art is second nature. A painter since childhood, Monika invested her creativity into her company and charity, Make and Break Arts Foundation.

By expressing herself through art and inviting local artists and community members to participate, Monika has created her own masterpiece of community involvement and an appreciation for the arts.

“Through the arts, creativity is unleashed and reality is examined outside the box. When we are truly part of a community, our creative genius flows and we are able to create works that are not only beautiful, but those that also capture the beauty of freedom through unity,” she says.

Some of the artists featured in this golden night of paint include:

Kevan Seng, founder of Capuletart.com is one of the coordinators of the “Golden Brush”.  Kevan is an artist agent of local artists Raymond Chow, Ron Sombilon and Rob Daly. Seng met Raymond Chow, a long-time Vancouver artist icon by chance at a bus stop in Richmond, BC in 2007. Two days later, they met again at Raymond’s gallery warehouse in Richmond, BC. Due to his awe and admiration for Raymond Chow’s artwork, Kevan Seng decided to pursue a life in the arts as an artist agent under Chow’s training.

Monika Blichar, of MAB Ventures Inc. and Make and Break Arts Foundation, was the founder, curator, and coordinator of One World Art Show and Fundraiser held at Telus World of Science in Vancouver, BC on May 1, 2010. With over 650 guests and participants, the venue was filled with over 600 pieces of art from over 60 artists, live painters, fashion and jewelry designers, a body painting competition in addition to a live and silent auction. Proceeds from the silent and live auctions went to Safewater Nexus, a charity which has been dedicated to the rebuild in Haiti since the January 2010 earthquake and head of the Joshua’s Village project.